Xenon is a colorless, odorless, noble gas. Xenon is found in the atmosphere at 87 parts per billion. Like other rare gases, xenon is produced by using cryogenic distillation to extract it from the air. Electronic Fluorocarbons is a leading supplier of rare gases, including xenon, with established global supply chains to ensure reliable delivery.

Our facility in Hatfield, PA uses sophisticated technology to produce and analyze xenon and xenon blends meeting specific customer requirements. We have a lab with sophisticated analytical capabilities to monitor in-process xenon and the quality of outgoing product. We have an experienced quality team and robust quality process to ensure that the most exacting standards, including those of the semiconductor and aerospace industries, are met.

Xenon is used in a wide variety of applications. It is a component of excimer laser mixes to produce certain wavelengths (282nm XeBr, 308nm XeCl, 351nm XeF). Xenon is used in radiation detectors, that are designed to measure X-rays and gamma-rays. It is used in sputter deposition, especially when depositing coatings with high molecular weights.

Xenon is used as a propellant for satellites and other spacecraft. It is used for production of semiconductors in annealing, etching and lithography applications. Xenon is used in halogen and HID lighting. Xenon even has some medical applications, including uses to enhance MRI imaging or as anesthesia. Xenon recovered from customer applications can often be purified for reuse.

There are a number of applications where xenon is used, but not used up. The used xenon can be captured, purified and reused. The xenon is purified to meet the same specifications as the virgin material. This recovery offers the potential for reduced costs, and increased security of supply. Electronic Fluorocarbons offers xenon recovery systems that collect used xenon at customer sites. 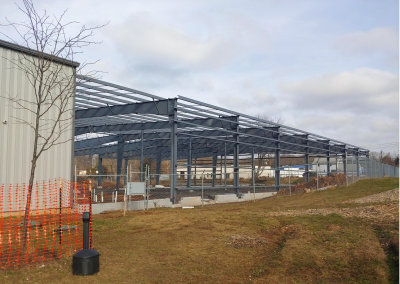 Happy 2019! We hope you had an enjoyable and relaxing holiday season. We want to take a moment to reflect on the past year as well as share what we have in store for...

Electronic Fluorocarbons is expanding both its facilities and its workforce in Hatfield, Pennsylvania, with the addition of a 32,000-square-foot extension to the...